Craig was a koala bear. He lived in a thick green forest, or some might call it a jungle. He had a home in a large and beautiful gum tree. His mother and father live there too, and his big sister. One day his mother said it was too hot in the tree and that the family would be moving away to a cooler place. Craig was sad to leave his tree but he didn’t mind being cooler. They settled into a smaller place. Craig thought it was okay but life became very different.   Craig’s dad had to learn all sorts of new things in their new part of the forest, and was often late home and tired. Craig’s sister had to go to a new school , because she was older than him and Craig was not able to go everywhere and do everything with her any more. He felt sad. 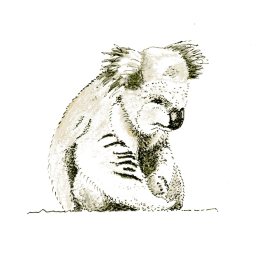 His mother was going out to work while he was at school and was tired and sometimes cross. He began to wonder if it was his fault that his family was not around him like they had been before in the big tree. He started to think he needed to be a better koala person. What could he do to make himself better so that they would all come back and have time for him again? He had heard often enough that he should be clean and tidy. He wondered if he wasn’t clean and tidy enough. He started to worry every time his hands were dirty that other bears would not like him. He started wanting to wash his hands after he touched things that might be dirty. He always washed his hands before he sat down to eat his food. His mum told him that even though he couldn’t see the dirt it was there just the same, so he should wash his hands. His mum always said he was a good bear when he said he had washed his hands before eating. He liked to think that she thought he was a good bear. He started to imagine that all sorts of things could make his hands dirty, and he didn’t want to be dirty, he wanted to be good bear. So he started to wash his hands after he did all sorts of things, thinking about all the invisible dirt there must be around.

He started to keep his toys very very tidy so that he would know if any of them had been touched by someone else, because if they had then he would have to wash his hands if he played with them.

One day a kind lady koala who was a doctor came round to talk to his mother as she was worried about Craig always washing his hands all the time. The doctor explained to Craig that koalas and even people all are actually very strong and their bodies know how to get rid of dirt even if they swallow some. Nobody needs to be ‘extra extra’ clean. Too much washing can make your skin go dry and sore. You don’t need to be afraid of a little dirt. Mum will still love you even if you do have sticky hands. Sometimes mums and dads get very busy and tired and so do sisters, but you need to understand how they are feeling. Things have changed for them too. They aren’t in the big tree any more, just like you. Life doesn’t stay the same all the time. When changes happen we all need to change too. We need to think what we can do to help each other when big changes happen.

‘What do you think you could do that could help your mum and your sister?’

‘I could stop running the taps and wasting water for Mum,’ said Craig.

‘Ah, so you know she doesn’t want you to be so extra extra clean?’ asked the doctor.

‘Yes I do really. She says I got into a bad habit. I waste water.’

‘Ah, I see, and what about your sister?’

‘Well she doesn’t like all the water on the toilet floor all the time, she gets cross with me for that.’

‘So do you see a way of making your mum and sister happy now?’

‘And can you be happy not washing your hands every five minutes?’

‘Yes I can. You tell me my body is strong and it can just fight off those germs, well I’ll let my body do that now. And if mum is tired, I’ll just cuddle up quietly and let her have a rest. I don’t really like washing my hands all the time. Now you’ve explained I know they will still love me even if I’m a bit dirty.’

‘That’s right, Craig, they will always love you. You won’t forget that now, will you?’

Where did Craig used to live?

When his family moved what changed? How did that make Craig feel do you think?

What did Craig think his mother would say if he told her he had washed his hands before eating?

Craig started to wash his hands more often than he needed to because he wanted his mum to think he was a good bear. He was worried that perhaps it was his fault that his mum and sister couldn’t spend so much time with him. He was trying to be a better bear. It wasn’t his fault at all. Things just change sometimes, and it’s nobody’s fault.

Other questions and other advice may be appropriate.