Some useful guidelines for peace and harmony.

My father went to England to earn more money. He left us behind – Wazek, my brother who is twelve and me, Tadjo. Our mum works in a factory in Warsaw. We live in a flat on the outskirts of the city. Dad said that if all goes well maybe we can visit him in England. He shares a house with several other Polish people. He sends half of what he earns back home to us. It is good to have more money, but it is not good to have no dad at home. I miss him a lot. So does my mum. Sometimes she cries at night. She thinks we don’t hear, but we do. It’s usually when we’ve been arguing. She used to say, ‘Just wait until your dad gets home’. She doesn’t say it any more. She just tells us to stop arguing and then…

Sharon and the Chat Room

Rain streamed down the window pane; Sharon was bored, she didn’t feel like reading a book and had no fresh ideas to add to her sketch pad. She couldn’t be bothered to practice on the piano.  She glanced round her bedroom looking for ideas, picking up her iphone she scrolled down through the apps.

Sharon wondered if any of her friends were online. None of them were.

She lazily clicked and scrolled until she found some signs of activity. It was a chat room. Some of the people in school had mentioned chat rooms, but until that moment she hadn’t bothered to look at them. She had thought that there was no point in talking to strangers she would never see and who might be across the other side of the world.

However today was different. She was curious. The subject of the chat looked interesting to her. She thought she might learn a little bit more about a game that she enjoyed playing on her phone. There seemed to be about five people in the chat room. Some of them actually displayed their photographs, and others had avatars. These avatars and looked very glamorous. The photos did not. She thought she would watch the conversation. She didn’t have to join in, but to watch she had to make her presence known. She had an avatar, it was a cartoon picture of a young woman who looked at least five years older than she was, and who had beautiful long blonde hair, large breasts and a very tiny waist. Her avatar’s name was Gudrun.

The other people on chat room were all boys, she could see from the photographs that they were about her age or maybe younger. The things that they were saying were very boring, but every so often somebody made a joke or insulted someone else and there was a bit of banter. The language used was not very pleasant. It was a bit like a playground conversation between boys who were trying to prove how grown-up they were, by swearing and making rude suggestions about their body parts. She soon got bored. What was the point of it? What a waste of time! It had nothing whatever to do with the game in the chat room name.

Sharon turned to her sketch pad. She thought she would redesign her avatar. She gave Gudrun a hair cut – very short and spikey. She changed her clothes to black leather and chains. She still had large breasts and a tiny waist. She could easily find all these aspects of appearance online. Soon she had a bold looking young woman staring at her from the screen. 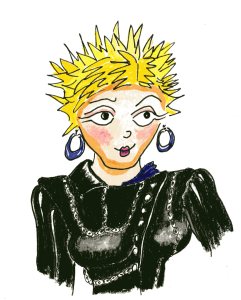 Yes! That might raise some interest! Sharon went back to the chat room. Some of the young boys had dropped out and there were two new people in it. She wondered if she’d be brave enough to join in the conversation which seemed to be about game tactics this time. As soon as she made herself known, one of the new people was addressing her.

‘Well, hello, Gudrun, have you come to play?’

Sharon suddenly felt very hot, and nervous. Should she reply? Well, surely it wouldn’t do any harm?

‘Yes, I want to learn some new moves’, she typed.

‘Oh, I could teach you a few of them,’ another person typed.

“Get lost dude, I saw her first,’ typed the first person, who from their avatar appeared to be a cool redheaded girl.

‘Go and f*** yourself!’  said the second person whose avatar looked like a sweet young blond girl with long eyelashes.

Sharon switched off her phone. She was disgusted. At that moment her elder sister came into her room.

‘What’s the matter Shaz? You’re looking a bit off!’

‘Yes, I am! I was just looking at ‘MindKraft’ to learn some new moves and I went in a chat room. It was full of creeps!’

‘That’s the trouble with chat rooms, they usually attract stupid people who just want to talk about sex. They are sick! A girl in my class thought she had met a really nice guy on a chat room. He had a brilliant avatar, she said. She arranged to meet him at the shopping mall in town. He turned out to be fat and spotty and about 25 years old. He got really cross when she said she wasn’t interested. He tried to grab her but she was faster than him and she hid in Next until he disappeared.’

‘Why did she think he was so nice in the first place?’

‘She showed me all the things he said to her online. She saved them onto her laptop, see. He sounded really interesting and funny. And he really buttered her up!’

‘What do you mean, buttered her up? I don’t know what you are saying!’

‘Well, it’s what they do, isn’t it, to make a girl feel good. He flattered her. He said things like her avatar had beautiful hair, and then he said he thought her real hair would be even better. Then he said her eyes were gorgeous, and he knew that her own eyes would be just as lovely. He asked her for a photograph, and she sent him one!! Stupid girl. Then he really went to town. He praised every bit of her, from her clothes to her figure and face. He even liked her shoes!! It’s called grooming, you know, lying to make someone feel good and to trust you.’

‘And she believed him?’

‘Well, yes, she wanted to, you see. She was feeling lonely and thought that having a boyfriend might solve everything.’

‘She was lucky in a way. She escaped, some girls are not so lucky. It was on TV the other day. Lonely girls getting kidnapped by men who pretend to be really nice at first, then the girls can’t get away from them. Ugh, let’s not think about it!’

‘I think I’ll stick to people I really know in real life now. I won’t bother with chat rooms.’

‘Yes, that’s right Shaz. They are usually a really lower class of people who use them – people who love to swear and talk about their private parts, who wants to know about that? And as I said, some of them are really nasty and dangerous.’

Did this story remind you of anything in your life?

What advice would you give to anyone who keeps going on chat rooms?

Why do some men ‘groom’ girls?

What might the danger signs of untrustworthy people be?

What are the real dangers of chat rooms do you think?

Discuss this with an adult that you know and trust, who knows about online activity and its dangers. The following information came from a website of the parents of Breck who was groomed on an online games chat room and murdered.www.breckfoundation.org